Cichlids have genetic sex determination, meaning that the chromosomes they inherit from mom and dad determine whether they will be male or female. However, their system is a little more complicated than ours is. For most mammals, sons inherit a single, degenerated Y chromosome from their dads, and that turns on the cascade of genes and hormones that make testes instead of ovaries. Birds have a slightly different inheritance mechanism where daughters inherit a degenerated sex chromosome from their moms, which we call a WZ (female) system to distinguish it from the XY (male) system. Cichlids have both Y regions (from father to son) and W regions (from mother to daughter), and there are many of these regions on different chromosomes across the different species! In some cases, the same population can have more than one of these sex regions, and when that happens, genetic sex gets a lot more complicated.

Let’s consider a population of the species Metriaclima mbenjii, which has two, independent sex chromosomes: one male Y and one female W. If a male with a Y mates with a female with a W, there are now four genotypic sexes, instead of two (see figure 1). What sex is an individual that gets both sex determiners? In this particular case these fish are females, despite inheriting a Y from their dads.

Complex sex determination systems like this can be very interesting from an evolutionary perspective because they have the potential to shift sex ratios. In this particular example, the offspring from this family are 75% female and 25% male. I’m interested in this kind of system for an additional reason–genetic sex influences more than whether gonads produce egg and sperm! If there are four genotypic sexes, are there also four phenotypic sexes? What can this tell us about how sex differences evolve?

The most obvious difference between the female genotypes is color. Females that inherit a W sex determiner also have an orange pigmentation with irregular, black blotches. Many years ago, scientists named this color pattern Orange Blotch, or OB, and while it is a very obvious color when you take the fish out of the water, it makes them very hard to see when they are above mottled rocks and sand. Blending in is a good trait for females, who need to be inconspicuous as they care for their young, but very bad for males, who need their bright, flashy colors to signal to females that they will be good fathers. This sexual antagonism is resolved by pairing the color (OB) with a sex determiner (W), so that only females inherit the color pattern. 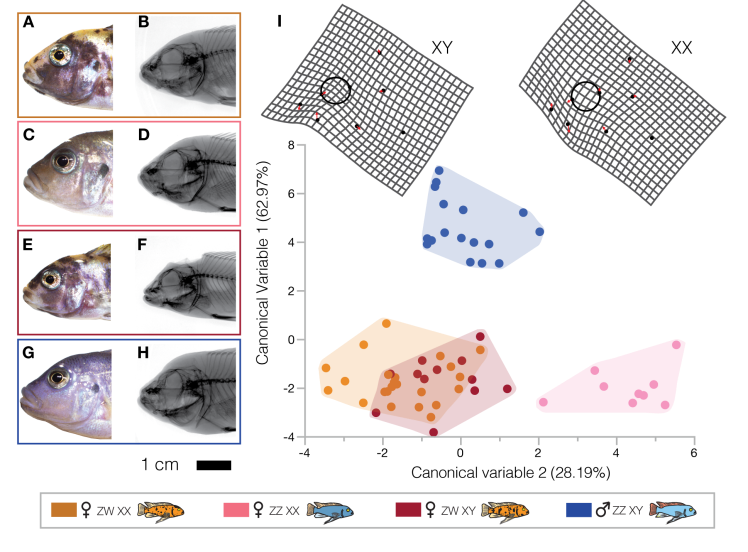 However, color is not the only difference between males and female cichlids.  Genital shape, head shape, and behavioral strategy have been shown to have sex differences in many species of African cichlid. To determine whether polygenic sex expands the variation these traits, I genotyped sex chromosomes and measured morphology and behaviors in a wild-derived, laboratory line of Metriaclima mbenjii. When we look across the four genetic sexes, we find that each sex has its own set of secondary sex traits, fundamentally resulting in four phenotypic sexes. For example, head shape is influenced by the Y and the W (Figure 2).

Cichlid sex determiners interact with each other in dynamic ways. In one genetic background, the W overrules the Y, but in another, the Y could overrule the W. That means that a trait, such as a large head or more extensive sand grooming, could be different between the sexes in one species but present in both sexes in another species.

As we study the biology of sex, it is important that we keep in mind the diversity in secondary sex characters. Sexual “dimorphism” may realistically be sexual polymorphism, as the development of these traits depends not only on the sex determination gene(s), but any linked genes on the sex chromosome, modifiers across the genome, and the environment.