African cichlids show a great variety of behaviors in the wild that allow them to find mates, defend their homes, and gather food. Species can have very different strategies for these tasks — a sand-dwelling, sonar hunting Aulonocara needs to swim past many other fish, winding over substrate to find its favored food, whereas a rock-dwelling, generalist Metriaclima who is looking for a mate may need to fiercely defend his territorial rock to successfully breed. These behaviors critical for the survival of the animal, and often have a genetic basis.

If we are going to understand how the genome “programs” these behaviors, we first have to be able to measure the behaviors in a way that minimizes the influence of environment. To solve this problem, I’ve raised fish from different species in a controlled laboratory setting and looked for differences in how these species respond to new individuals, new objects in their home territory, and new environments. All of my experiments are filmed, which allows for tracking with computer vision or carefully scoring for many behaviors.

Figure 1. Individual variation in response to a new shell in the home tank over 5 minutes, where the red fish interacted with the shell, and the blue fish did not

One feature of Lake Malawi is that many species live in community assemblages, such that each individual can interact with not only members of their own species, but also many other, varied species. I quantified the interactions of individuals with a species they had never before encountered, recording the location of both fish in the tank as well as movement and interaction events. This allowed me to identify potentially biologically meaningful differences in behavior that would not have been possible if I only counted number of aggressive acts. For example, I found that the Aulonocara species tested was much more likely to display their fins from inside their territory, and the Metriaclima were all more likely to display their fins while out, swimming around (figure 2). 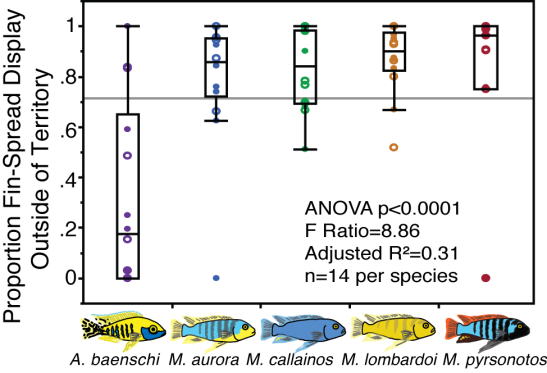 By taking wholistic approach to quantifying exploratory behaviors, I was able to find candidate behaviors that appeared suitable for further genetic exploration.